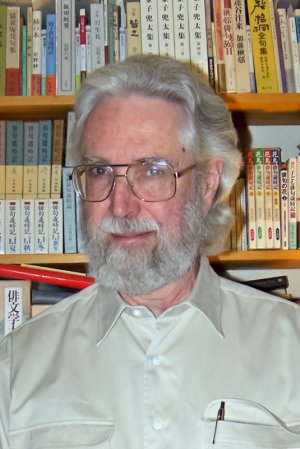 Poet, non-fiction author, translator, teacher, and editor William J. “Bill” Higginson was born in New York City and raised there and in Bergenfield, New Jersey. He received his B.A. with honors in English from Southern Connecticut State College. While in the U.S. Air Force he studied Japanese at Yale and served two years in Japan, where he began writing and translating.

In 1975, Higginson founded From Here Press in Paterson, New Jersey, publishing poetry chapbooks by Allen Ginsberg, Ruth Stone, and others. Higginson’s own books include The Haiku Handbook, Wind in the Long Grass (an anthology for children), The Haiku Seasons: Poetry of the Natural World, translations such as Red Fuji: Selected Haiku of Yatsuka Ishihara, and several collections, including Paterson Pieces (poems), Death Is & Approaches to the Edge (poems and essays), and Surfing on Magma (poems). On the Internet, he edited the “Haiku and Related Forms” category of the Open Directory Project. His involvement with Japanese-style linked poetry is described on his web site at http://www.2hweb.net/haikai/renku.

Higginson’s poems and essays appear in numerous literary journals, anthologies, and encyclopedias, for example Blue Stones and Salt Hay, Under a Gull’s Wing, The Teachers & Writers Guide to William Carlos Williams, World Poets, An Exaltation of Forms, and Poets of New Jersey. He has led writing workshops for children and adults at schools and literary and arts festivals throughout North America, including the Geraldine R. Dodge Poetry Festivals in New Jersey and the Border Book Festivals in New Mexico, and in Japan. He has taught high school English, mathematics, and Japanese, and has taught literature, composition, public speaking, and creative writing at Union County College, N.J.

Higginson’s work as a visiting poet in elementary and secondary schools and community arts programs has been documented in New Jersey English Journal and in Classics in the Classroom: Using Great Literature to Teach Writing (1999) and The Alphabet of the Trees: A Guide to Nature Writing (2000), both from Teachers & Writers Collaborative.

Higginson has received a translation grant from the Witter Bynner Foundation for Poetry, a fellowship in poetry from the New Jersey State Council on the Arts, and three Merit Book Awards from the Haiku Society of America.

He lived in Summit, New Jersey, with his wife, the poet and fiction writer Penny Harter.

but the river . . .
William J. Higginson
Read a selection of his haiku