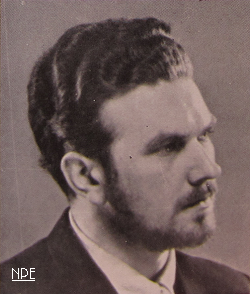 Willem Johan van der Molen was a seminal figure in the Dutch haiku tradition. Even before he came to haiku in the 1980s he was a well-known poet in his native Netherlands and in 1955 he won a poetry contest organized by KLM, thus winning a publication in the anthology Winged word (Stols), The Hague, 1955. Among others he was also contributed to Great Netherlands (May / June 1944), Parade of Prophets (1944-1945), The Red Lantern (1945), The Guide, Columbus. However once he discovered haiku, he wrote virtually nothing else. In a period when most of the Western haiku imitated classical Japanese one, Willem demonstrated his innovative approach and used a highly associative language.

Willem was the founder and editor of Vuursteen (Flint) one of the earliest haiku magazine in Europe, but after some disagreement with some of the editors he founded in 1991 his own magazine for short poems Korheidshalve (Brevity) which ran until 2002. He published several volumes of his own work, and although Japanese literature was Willem’s major inspiration in both essays and poetry, it wasn’t something that he simply mimicked. It was not until the late 90's, when Willem’s unique style and broad vision started to receive the recognition he deserved as a pioneer of world haiku not only in the Netherlands but also in the Western world. Sadly, he died in March 2002 at the age of 78.

He also produced a few volumes of translations of Japanese haiku, especially 20th century poets, into Dutch. He was and will remain a key figure in the Dutch haiku tradition.

Some of Willem’s haiku:

when you lie very still

and are almost asleep you are

every taste of the sea

A small line of sun

I try to smile I also

on a soul - the damp spots