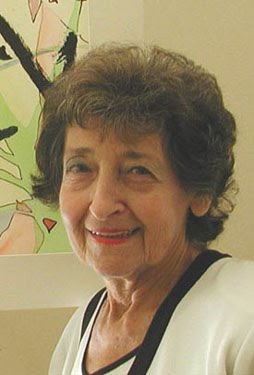 Francine Joy Porad,founder of the Haiku Northwest group and former president of the Haiku Society of America,was born on 3 September 1929, in Seattle and was a lifelong resident of Washington State. An accomplished painter as well as haiku and tanka poet, in 1988 she organized one of the country’s first regional English-language haiku groups, named Haiku Northwest, a vibrant group that continues to meet monthly in Bellevue, Washington. She received her BFA degree in Painting from the University of Washington in 1976.

Francine was one of those rare artists who made a significant mark in two fields. As an artist (in both oils and watercolours), she exhibited in many one-woman and juried shows nationally and internationally, with awards including the Adirondacks National and the National League of American Pen Women's Washington State Art Competition. As a highly prolific poet, Francine published two dozen books of her own haiku, senryu, tanka, and linked verse, usually at a pace of one book a year, starting in 1986. She served as President of the Haiku Society of America (1993-1994), edited the respected haiku journal Brussels Sprout (1988-1995), owned and operated Vandina Press, and both won and adjudicated scores of national and international contests. It was as a collaborative artist that she realized some of her best work. In 1988, she founded Haiku Northwest, one of the first regional English-language haiku groups in the United States. That group continues to meet monthly in Bellevue, Washington. She presented workshops at the Haiku Canada Weekend in 1992 and at the Haiku North American conferences in 1993 and 1995. It is no doubt largely due to Francine’s influence that Washington state has more HSA members per capita than most other states in the country, and that haiku is well respected in Seattle’s mainstream poetry community as well. Francine was tireless in her dedication to the haiku community, and in 2004, the Haiku Society of American presented Francine with its highest service award, the Sora Award for Lifetime Service to Haiku. She also volunteered her time over the years to the Camp Fire Girls and to the Red Cross Gray Ladies (Kline-Galland Home).

As Francine proclaimed in the title of one of her books, Joy Is My Middle Name, she did indeed make joy the centre of her life. Sadly following a lengthy illness, Francine passed away on 27 September 2006, at the age of 77, in Kirkland, Washington, surrounded by her loving family. Francine was an internationally acclaimed poet and artist. She produced art in a variety of media since the 1970's and will long be remembered not just in the USA, but around the world by many poets and friends who knew her and her poetry.

a six-inch carpet of leaves

for the tree house

Some of Francine’s haiga: