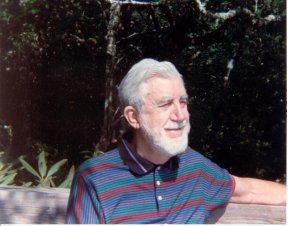 Charles B. Dickson from Georgia, US was born on 14 June 1915. He worked as a freelance writer and professional journalist whose poetry, articles and short stories were published both in the United States and abroad.  His interest in haiku began in 1984 when Charles was almost 70 years old but his haiku became widely published almost immediately in various journals and anthologies.  He won several awards including The Museum of Haiku Literature Award and first place in the Harold G. Henderson Memorial Awards.

In “Haiku in English: The First Hundred Years” Jim Kacian writes: “Charles B. Dickson came to haiku relatively late in life, but his long-standing familiarity with the natural landscapes of his environment proved a fertile ground for his primarily traditional haiku, characterized by close observation and a strong sense of seasonality.”

time to board the plane

after so many handshake years

dad and I embrace

Up from the coal mine     the sun the wind

from the pasture wall

in shallows among the reeds

over the gristmill dam

I kneel by the mountain spring

For a drink of stars.

the aroma of hot gumbo

floats on the bayou