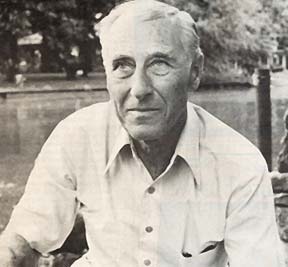 “A true haiku is an experience experiencing itself.”

Robert Spiess, editor of American Haiku and Modern Haiku was born on 16 October 1921 in Milwaukee, Wisconsin.  After graduation from high school, he enrolled at the University of Wisconsin, in Milwaukee, in 1939 but his plans were interrupted by World War II. He was drafted into the Army Air Force and trained as a cryptographer. Perhaps it was his war experience that helped determine the peaceful path he would follow thereafter. He earned his B.S. degree from the University of Wisconsin, majoring in Botany and English, and then received an M.S., with a major in Vocational Guidance.

Robert became interested in haiku in the late 1930s, through early translations of Japanese haiku.

In the late ’40s and early ’50s he acquired R.H. Blyth’s four volumes of Haiku, and from then on he became hooked on this poetic genre. Robert Spiess published his first haiku in 1949 in American Poetry Magazine, and he became a participating writer. In 1963, he purchased the premiere issue of American Haiku and two of his poems were published in the second issue. A few years later, he accepted the position of poetry editor for that journal.

Robert Spiess’ first collection of haiku, The Heron's Legs, was published in 1966 by American Haiku in Platteville, Wisconsin and over the years he published ten more books. He was also the author of several articles and essays on haiku and his poems have been featured in numerous publications and anthologies. The premier issue of Modern Haiku was published in 1969, and ten of Robert's haiku appeared in the second issue. Within a few years, he was appointed associate editor of that journal. In 1977, he published the first of his "Speculations on Haiku" in Modern Haiku, and in 1978, he became that journal's editor and publisher until his death in 2002.

Robert's countless contributions were integral to the evolution and success of English-language haiku and he was an instrumental mentor in the haiku careers of many contemporary haiku poets.

among these willows:
and breathing the light that falls
from leaf to green leaf

A couch à la Freud, —
curing souls of sex and things
by which they’re annoyed

canoeing the bend —
a man throwing stones at coots
turns away

canoeing the bend —
motionless, a short-eared owl
watches from an oak

canoeing the bend
another bend ahead
thank you

wild roses . . .
tarrying beside one
touched by time

(From a Kind Neighbor, Haiku Society of America Members’ Anthology 1997)

walking for my heart ...
so many little karmas
beneath a step