Haiku: The Art of Implication over Explication

Haiku (plural and singular spelling) are the shortest of short verses, with an intentional rearrangement of words from language to tempt the reader’s reaction beyond that of the words laid down. It’s where the sum of the poem’s physical count of words goes beyond what lies in plain sight. So how is that, and what where and why does it happen?

The three-line haiku is often obtained by making a two part poem of words you can see and read, with an invisible bridge between, where faith is placed on the reader to cross successfully. Here is a simple straightforward three-line haiku:

mist haze-
a crow cleans its beak
on a rooftop aerial

There is a clear one line section starting the poem followed by a two line section that moves onto something particular out in the mist. Conversely, here is a haiku starting with two lines as the opening section:

Now I will touch on an aspect of haiku I’ve witnessed over a quarter of a century, mostly on the three line version of haiku in the West and other countries, as Japanese haiku are in fact traditionally a one line poem. This haiku moves on slightly from the preceding examples. The reader can jump from a picture of white sails, a boat maybe, or even laundry, to the shape of the wind in a tree over many years:

white sails...
a wind has also shaped
the tree

There is just a gentle jump cut in story, as we cross that invisible bridge, so often used in movies as a symbol of self-belief and trust.  Why is the invisible non-text aspect so important to haiku, at least on some occasions?  Well, for a start, haiku is incredibly brief, even shorter than a tweet message from Twitter, yet it conveys so much more whether we have a common pool of experience or not, perhaps as a commuter…

sunlit brick
each house passes
along the train

We slide in and out of many things: Career; love; health; friendships; and slide between words and phrases of waking hours, and sometimes enter reveries of childhood…

horses in the dusk. . .
half-remembered dreams
of a rail journey

…Into something jointly literal and allegorical:

war moon
the flickering of humans
at birdsong

A poem that Asahi Shimbun Haiku in English feature editor David McMurray accepted in minutes! It is a very specific seasonal reference, the blood moon eclipses of 2015: NASA confirmed a 'Tetrad' - four successive 'blood-red' lunar eclipses each followed by six full moons - ending on September 28th 2015. Birdsong is an indirect link to the first World War, and the eye of a storm before the rush of troops into machine gun fire: When things hush, time slows, birdsong is noticed by some.  It’s also my symbol of the daily routine of very early morning workers who make it possible for our later morning commute to start with a coffee, perhaps with a fresh sandwich; bagel; or sushi. Have you ever had to get up around dawn to start a vacation, or an early work shift and birdsong feels especially intense?

This non-verbal bridge that cannot be spoken, a no-text land of white space/negative space where omissions and low key suggestion are equally important makes a haiku reverberate.  Is it a feature that makes haiku different?  It’s certainly a discipline not to spell everything out like a newspaper column, with all the slants, biases, and hidden, blunt-open agendas that burrow into newscopy.  And yet a haiku is never quite neutral once a reader engages: It can fly along, or power, the reader’s imagination. The famous children's book Tom's Midnight Garden by Philippa Pearce has a line: "When Tom hears old Mrs Bartholomew's grandfather clock in the hall striking thirteen, he goes to investigate.” An engaged reader always looks for that extra chime of 13 o’clock.

we learn to adjust
the clocks of our hands
borrowed moon

Enjoy the first episode of the definitive television adaptation, and how the opening credits spin and pivot around the year, just like haiku: Remember, it’s all about time, and space(s):
https://www.youtube.com/watch?v=hW_sKdHvJ6s

Composing in white space seems impossible to a poet where words mean everything, but don’t discount all those little white spaces; it’s part of the poem you don’t see immediately.   A photographer, a painter, and a journalist all use white space, but does a tiny poetic verse require it?  Yes, haiku revolves and evolves around its white echoes. To my mind it’s vital we apply brushes to “paint in the white space” for the furniture of words to reside. There is more than meets the eye when we stare down that blank physicality of a page of paper or a computer screen: There is the untouched author’s thought and writing process right through to the finishing touches of the poem; where the visible and invisible meet and bleed into each other.

And remember, regardless of the medium, be it a novel or a haiku, there is always a large percentage of backstory left out that still acts as a catalyst.  White space is the foundation of haiku, not its adversary. It’s our ladder from the first rung to the ones beyond the top one:

northern lights
a boy makes a ladder
out of his telescope 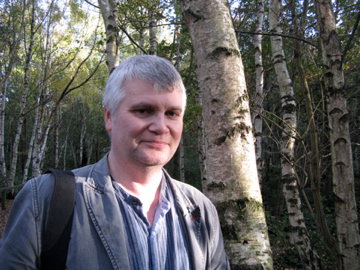