On What is Haiku

Now I go to what is there, and each time get something different.  Sometimes I get what I want – and other times, perhaps more rewarding, I get what I didn’t know I didn’t want, with pain.  Each time, discovery.

Haiku is that fledgling moment – when the wing strokes become sure – when the bird has staying power in the air.

Haiku can’t be gimmicked; it can’t be shammed.  If it is slicked into cuteness, haiku loses what it had to give.

The split second one starts to touch a flower – real or plastic? – that’s haiku. Before the hoof comes down, that’s haiku!

Like a giant cat
rain licked away the  hopscotch
chalked in the bright sun.

Adventures over
the cat sits in the fur ring
of his tail, and dreams.

Holding umbrellas
children, like rows of mushrooms
glisten in the rain.

So pale -– it hardly sat
on the outstretched branch
of the winter night.

In a quiet cove
ducks abandon their formation
swimming after bread.

Boy on a mailbox
perched like a solitary bird
watching the sunset.

Declaring a truce
he slurps from his water gun
to cool himself.

A wrapping of snow –
here and there in the ivy
a dark leaf showing.

At the ballet
pushed into a corner
a wheelchair

A further selection of her haiku may be found on her Living Legacy page. 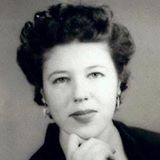 I’m not sure when she first wrote this or how she formulated her own definition, but judging from its publication in the haiku journal Wind Chimes in 1981, it was obviously decades ago. She has a slightly different version as well, but since this is the one that got published, it’s the one I wish to share. Sydell Rosenberg 1929-1996 was a charter member of HSA in 1968 in NY and wrote haiku, senryu and some tanka as well for decades, as well as other forms of poetry; short stories; puzzles; translations from and into Spanish; and more. She was also a public school teacher and taught English as a Second Language. Mom also published a pulp novel under a male pen name in the 1950s, when she worked as a copy editor for a small publisher in NYC. She was quite young, I think fresh out of Brooklyn College, and supposedly wrote it on a dare from her boss when she complained about the quality of the manuscripts crossing her desk. These cheap pieces of fiction were, I guess, daring for their time. I have some treasured, delicate copies in my possession and this book is also floating around on the internet. It’s entitled “Strange Circle” by Gale Sydney … her maiden name was Sydell Gasnick. Even then, early on, I can detect her voice and style which she developed and carried through much of her subsequent writings.