Listen to the performance now 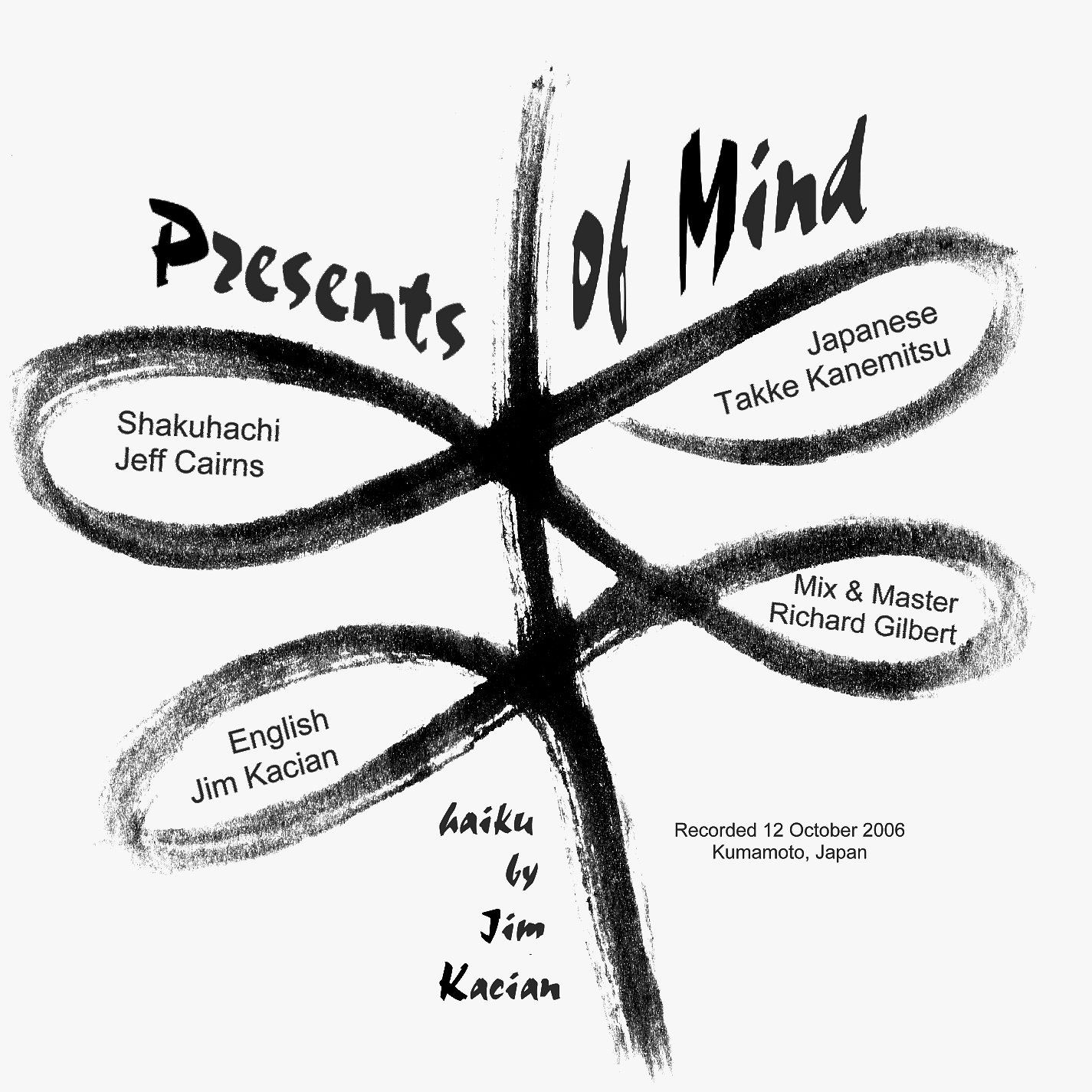 In October 2006, on the occasion of the Japanese release of the bilingual edition of Jim Kacian's Presents of Mind, a special performance of sections of the book was held in Kumamoto, featuring the author reading his poems, accompanied by Jeff Cairns, shakuhachi master and sensei. Inspired by the success of this performance, this pair convened at the recording studio of Richard Gilbert, chairman of the Kon Nichi Translation Group (Kumamoto University), which had created the translations of the book. Gilbert is also an experienced studio producer and recordist from his days in Los Angeles. Joining the group was Takke Kanamitsu, haiku poet and one of the translation team. This group recorded the entirety of Presents of Mind, featuring again the author reading each poem, followed by the Japanese version read by Kanamitsu, and concluded each piece with a shakuhachi improvisation by Cairns.
"The CD is quite soothing and pleasant to hear. Such a recording puts me in the frame of mind to write haiku, even after a long stressful day at work.” Curtis Dunlap
The CD may be ordered from
"Presents of Mind" CD by Jim Kacian, Jeff Cairns and Takke Kanamitsu    $12.00
The book, "Presents of Mind" is a reprint of Kacian's award-winning first full-length book, this time with Japanese translations by the Kon Nichi Haiku Circle, the first time such serious, scholarly treatment has been afforded a book of English-language haiku.  Awarded the 2006 Merit Book Award First Prize for Best Collaborative Book by the Haiku Society of America."

How Presents of Mind as a bilingual book, and performance, came to be.
A background by Richard Gilbert

I first read Jim's book in 2002 or thereabouts. The haiku presented within were not only a journey of time, space, heart and mind, they were some of the best I'd read in English at that time. (If you check, you'll find Jim's book was not well-reviewed or well-understood around the time it was published.) Though there had been one or two books in Japanese which presented English-language haiku (in Japanese), the translations were always literal. Any sense of the power of what haiku could be as poetry, in English, was lost.

This was the first inspiration for the Kon Nichi Translation Group (and was our first project). I began to gather professors and also Ito Yuki (an MA student at the time) and Takke (a haikaishi, back to his hometown of Kumamoto, from Tokyo, and worldwide gypsy travels). We met weekly or bi-weekly in my office for two hours at a time. It took us several years to translate the book into what we considered interesting contemporary Japanese haiku, which might be received into the 450-year-old tradition at a level of quality at parity with works in the modern-Japanese tradition.

In retrospect, we had no idea how difficult the formal demands of Japanese would be in terms of lexis, rhythm, and freshness. We had to also consider kigo (season words), the problem of multiple kigo in a single haiku (not evident in English, which has no kigo tradition). As well, we needed to stay faithful to the original. It is more difficult by a factor of 1000 to decently translate into the Japanese haiku tradition.

Since the bilingual publication, I've had the opportunity to show the book to notable haiku poets around Japan. They have been surprised! One aspect of the book is that reading the Japanese first, readers become curious about the English. You could say it's a uniquely transformative text, on the level of reading, form the perspective of cross-cultural influence: a traditional form returns to the tradition, from a foreign shore, with its own new tradition, from the originating foreign shore. We cannot expect the non-Japanese reader to become involved with the Japanese, but the Japanese reader, interested in haiku, will often have enough experience in written English (from schooldays) to suss out the original, if with the aid of an electronic dictionary.

Kitting the whole work together, is the improvisational shakuhachi performance by Jeff Cairns, a world-class teacher and performer. Please take a listen to his latest works, available for download, here:

At the recording session, Jeff asked that he not be read the haiku beforehand, as he wanted to grasp and improv. each work authentically, with a fresh mind. We practiced the format with the first one or two haiku, and then we were off, taking breaks only at the end of each “Season.” The single session ran close to four hours — quite a challenge for the shakuhachi embouchure. We halted a few times for new takes, when Takke had trouble with his Japanese enunciation — some of the poems are tricky, that is, have a degree of unusuality, in Japanese. There are no overdubs, edit corrections or auto-tuning in the engineering.

Presents of Mind remains a unique experiment in cross-cultural performance and translation. Unfortunately, as a CD and book it has remained obscure over the years. It's my hope that through the Living Haiku Anthology website more people around the world will finally be able to enjoy the brilliant performances of the poet, translators, and musician — our international effort, representing a half-decade of work.

One additional mention: Jim Kacian provides a model for reading haiku in English — his sensitivity and nuanced emotional range makes him among the best readers of haiku I've heard. The book (as you see it in PDF form) was laid out by the two of us, with the goal of creating a spacious feeling, each page incorporating English, Japanese kanji, and the romaji forms of the poems. We all want to thank Don Baird and Hansha Teki for their help and especially expertise in making this mixed media presentation possible as an online work.