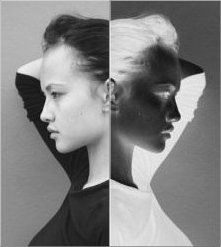 Svetlana Marisova was born the only child of a family who knew social and religious persecution in post-Soviet Russia.  The family moved to New Zealand in 2004.  In her later teens she responded to a perceived call to the cloistered life of contemplative prayer. A diagnosis of terminal brain cancer in late 2009 curtailed the way she was able to live out this vocation.

Over the remaining two years of her life she wrapped her past and present in even greater cloistered mystery while she tried to come to terms with her future.  Fascinated by language as much as she was by the interior silence of contemplation, she gravitated to the combination of both that she could find in writing haiku.  In a similar paradoxical manner she hid herself from the world while she reached out  to it through the anonymity of human interaction via the social networking complexities of the internet.  In cyber-companionship with Ted van Zutphen she worked out her identity as girl/woman, nun/social butterfly, contemplative/wordsmith as together they wrote and studied haiku via digital communications.

Some of her writings are available on her blog at http://marisova.com and on http://theartofhaiku.com, that she created as a repository for haiku in collaboration with Ted van Zutphen.  Both sites continue to be maintained by her friends.

A selection of her haiku.