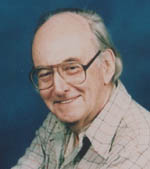 Robert Major was born on 9 August 1920 in Cranston, Rhode Island. Robert spent his childhood in Wickford, Rhode Island, later moving to Columbus, Ohio and graduating from North High School in 1937. He served in Europe during WWII as member of the 9th Air Corps, 404th Fighter Group. After the war, he studied at Georgetown University in Washington, DC and earned a degree in Foreign Service. He worked for the government in Washington, DC and in Montreal for several years. He was a professional editor for McGraw Hill in New York before moving to Washington State and the University of Washington Office of Publications. While there, he earned a degree in Fine Arts. He was an advocate for peace, and was instrumental in the founding of the Peace Park in Seattle. He was a lifelong Quaker and a lover of flowers (especially dahlias and dianthus) and his work often illustrates his commitment to the one and his passion for the other.

Robert was a longtime member of the Haiku Northwest group, and most recently attended meetings of the Port Townsend haiku group. In 1997 he published a chapbook of haiku Shadows on the Shoji. He said in this book that he had started writing haiku in 1990. He also served for two years as the regional coordinator for the Northwest region of the Haiku Society of America. His haiku were published in numerous journals in the United States, Canada, Australia, and Japan. He leaves a haiku legacy that exhibited a distinctive style, usually in a 5-7-5 pattern, or close to it, and with memorable, well-wrought images. He was published widely in all the major journals throughout his long and productive career and won several national and international haiku awards.

Robert Edwin Major died 18 May 2008 at the Hospice Care Center in Bremerton, Washington. He lived a life of simplicity, generosity, and kindness and will be greatly missed by his sisters, their families and many friends. Robert is survived by two sisters, Helen “Betty” Major and Mary Jane Leche and her husband The Rev. Edward D.

His book Coasting through Puddles: Haiku of Childhood won the Virgil Hutton Haiku Memorial Award 2001 – 2002. Robert has also won several national and international haiku awards. He served for two years as the Regional Coordinator for the Northwest Region of the Haiku Society of America.

Among the great stones
set to defend the castle . . .
young ferns find

silent Friends meeting . . .
the sound of chairs being moved
to enlarge the circle

Wakened by birdsong;
drifting from one world of dreams
into another

Easter egg hunt;
guiding the steps of the toddler
who hasn't found any

Playing hide-and-seek
on a long summer's evening...
called home one by one

(Coasting through Puddles: Haiku of Childhood, 2001)

In the far corner
at the bottom of the grave . . .
pair of digger’s footprints

wish made . . .
concentric ripples
spread away

Sometimes I think . . .
you would answer the phone
if I were to call

reaching a wide stream . . .
the trail continues
on the other side