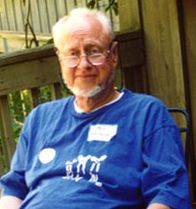 Robert F. Mainone was born on 11 February 1929 in Flint, grew up in Ravenna, and then lived in Delton, Michigan. He became a naturalist at an early age with miles of open space to explore. His father taught him how to hunt and fish which led to an interest in the life styles of Native Americans through books and the many arrowheads he found. He grew to appreciate the pre-Columbian Indians affinity with all of Nature. In his solo woodland wandering he found a diverse environment where something new might reveal itself at any moment.

In 1963, while stationed in Greenland during his service in the United States Air Force, he discovered haiku in Harold G. Henderson's An Introduction to Haiku and then Robert BIyth's Haiku series. Robert's artistic and reflective nature started to shine bright when he began writing haiku. He published his first of 11 books in 1964, and went on to receive numerous awards from the Haiku Society of America in 1976, 1977, 1980, 1985, and 1989. These can be found in many Michigan libraries. Some are in archives with his haiku diaries (1986 on-going) that record the changing seasons: changing seasons, bird migration, moon and star analogies, and one or more haiku per day. His haiku have also appeared on T-shirts, gift cards, and address labels "penny poems", etched on cobalt drinking cups, on large colour photographs, city buses and as a haiga over his back door. Robert’s haiku have also been presented in multimedia performances, set to music for a choral recital, and given as readings for Elderhostels, artist workshops, and memorial services. In 1966, he sauntered 60 miles in 8 days along the Lake Michigan shore, from Frankfort to Leland, sketching and writing haiku, resulting in his chapbook, Where Waves Were. The following year, he travelled to Japan to walk where classic haiku had been written. At Michigan State University he earned BS, BSF, and MS degrees in biology and forestry.

In addition to his accomplishments, Robert's other work experiences include working with the U.S. Geological Survey; the U.S. Air Force Weather Service, the Detroit Zoological Park, the Kalamazoo Nature Center, and the MSU Kellogg Biological Station Bird Sanctuary where he retired in 1991 after 23 years. In his free time, Robert enjoyed reading, all aspects of natural history, bird watching, and playing the marimba. He especially enjoyed listening to jazz, his preferred genre of music.

According to people who knew him well, Robert was one of a kind, sensitive and appreciative of everything around him. His character was a testament to his integrity and moral compass as he lived and enjoyed the life he was given to the fullest. In life Robert found true beauty, and in the moonlight of his life, may he have found the wonder behind a sky full of stars. Robert Mainone died peacefully in his sleep at his beloved Haiku Hut on 17 February 2015 in Delton, Michigan.

Parnassus Flowers(Wonderland Press, 1965). In addition, Mainone's haiku, articles, and other work have been published in Arts and Artists (Detroit Institute of the Arts, 1965);

Biographical sketches appear (or have appeared) in Marquis Who's Who in the Midwest; International Who's Who in Poetry; National Register of Prominent Americans; The Writer's Directory; Dictionary of International Biography; Leaders in Outdoor Education; Contemporary Authors; Michigan Poets; International Academy of Poets; and Michigan Authors; and Haiku in English: The First Hundred Years (W.W. Norton & Company, Inc., (2013).

up to his ears

I speak their language

light failing in a field

I enter the sky