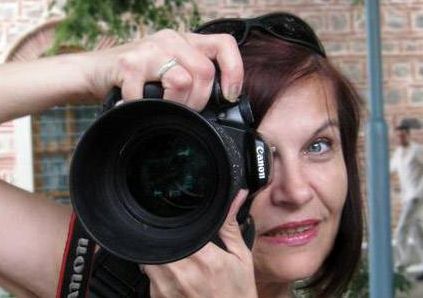 Maya Lyubenova was born on 12 September 1956 in Plovdiv, Bulgaria. She graduated from the English Language School in Plovdiv and later studied English Philology at Veliko Tarnovo University.

In 2009 Maya won the WHA Haiga Contest and was declared a Master Haiga Artist of the World Haiku Association. In 2010 she published a bilingual haiku collection called ‘Flecks of Blue /Парченца синьо’, Ars Publishing House, Blagoevgrad, Bulgaria, 2010. Although Maya left us with a rich collection of publications, photographs and haiga, her biggest legacy would have to be her mentoring and her participation in the translation of Jane Reichhold’s ‘Bare Bones School of Haiku’ into Bulgarian in 2012. This impressive amount of work proved to be an invaluable source of information for many Bulgarian poets - both beginners and more advanced on their haiku journey.

On 30 December 2016 our dear friend Maya left this world after a long and hard battle with the big C. A beloved mother and sister, a talented poet, translator and photographer, she will be sorely missed not only among her friends in the Bulgarian haiku community but worldwide!

Publications and other honours:

a tern’s shadow
darts across the beach
herring clouds

humpty dumpty
in a puddle
I stomp the moon

wishing well –
the words I whisper
back in my face

table for two
a scorched leaf falls
in the salad

stabbed
on an icicle
the hanging moon

the sparkles
in a stallion’s mane . . .
chestnut moon

spring thunder –
the newspaper shakes
in my hands

a stallion
galloping through my dream
winter wind

children's feet...
I hope they never put on
army boots

broken wall...
the barn and a cherry-tree
lean on each other