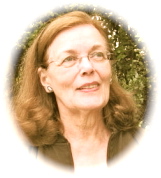 John Stevenson, editor of The Heron's Nest, wrote: “Peggy Willis Lyles was a giant presence in the world of English-language haiku during the last quarter of the twentieth century and the first decade of this century. Those who came to know and admire Peggy's published work were enriched by the encounter.” And indeed Peggy was one of the most authentic poets writing English-language haiku, and she was deeply respected by all who knew her. According to Randy M. Brooks, editor of her book To Hear the Rain, in Peggy’s haiku “time seems to stand still in a scene that will be as true tomorrow as it was a hundred years ago.”

Peggy Willis Lyles was born in Summerville, South Carolina, on September 17, 1939. Peggy earned her B.A. from Columbia (S.C.) College and an M.A. in English from Tulane University; where she was a Woodrow Wilson Fellow for 1960-61. Peggy taught briefly at Sophie Newcomb College, High Point (N.C.) High School, High Point College, and the University of Georgia. She was Poetry Editor of a regional magazine Georgia Journal from 1980-85. Peggy contributed regularly to leading haiku journals and magazines for more than 30 years. She was a long-time member of the Haiku Society of America and lived with her husband Bill in Tucker, Georgia where she died from complications of cancer on September 3, 2010.

Reading the first edition of Cor van den Heuvel’s The Haiku Anthology convinced her of the sparkle and value of English-language haiku. Since the late 1970’s her work was published regularly in leading journals in the United States and abroad. She has won the most prestigious of the haiku awards, and here haiku are included in many anthologies and haiku classics such as The Haiku Handbook, by William J. Higginson with Penny Harter and The Haiku Anthology, 2nd and 3rd editions, edited by Cor van den Heuvel. She judged competitions for the Haiku Society of America, the North Carolina Haiku Association, the Poetry Society of Georgia, the Tallahassee Writer’s Association, and other groups. Peggy was a member of The Red Moon Anthology staff and editor at The Heron's Nest. During her eight years as an editor with The Heron's Nest she managed to influence so many people, and her work will continue to touch so many souls in the future.

Peggy once wrote, "Sometimes we say too much. Words get in the way. . . . A good haiku offers just enough words, just the right words, to recreate the essence of a specific time and place and hold it permanently available."

Awards and some other Honours:

a mayfly
taps the screen--
warm beets slip their skins

wind and rain
the hand I reach for
in the dark

Indian summer
a turtle on a turtle
on a rock

shimmering pines
a taste of the mountain
from your cupped hands

into the night
we talk of human cloning
snowflakes

(To Hear the Rain: Selected Haiku of Peggy Lyles, Clothbound, 2002)

scattered stars
the space between us
tastes of pine

not quite goodbye--
an ocean beats
against the rocks

More of her work: