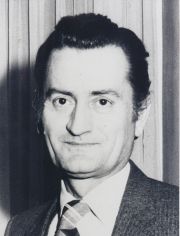 The Croatian writer Anto Gardaš was born on 21st May 1938 in Agići, Bosnia and Herzegovina. He graduated from the Law School in Zagreb in 1968.  Since his first publication in 1958 he has been cooperating in many literary magazines, journals, newspapers; in radio and television. He wrote poetry and prose for children and adults: poems, haiku poems, novels, short stories, fairy tales, and plays, radio plays for children and for the theatre. He has written about forty books and he also published five haiku collections.

His work has been translated into numerous languages ​​and he received several prestigious literary awards for his novels and poetry in Croatia. His haiku was awarded and commended on many haiku contests both in Croatia and abroad. Anto Gardaš died in Osijek, Croatia on 10 June 2004. In 2007 as acknowledgment of his work the Croatian Ministry of Culture established an annual literary award in his name.

Some if his haiku publications:

Hidden in the grass

a piece of glass becomes alive

under the ray of sun

My whole life is

just a drop of water

In the night sky
voices of wild geese
full of autumn.

The snow melts down:
young wheat
up to the knees in water.

Pale Moon.
The dawn had caught it
half-way.