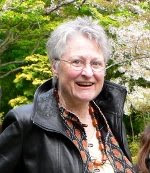 Donna Claire Gallagher was born in 1941 in Wisconsin.  In her 40s she moved to California and she described herself as having been “born a Californian in Wisconsin.” Claire has worked as a potter, educator, radio journalist, technical writer, naturalist hike leader for a land preserve agency, and as haiku poet. Claire became interested in haiku in 1991 after reading Wes Nisker’s commentary on haiku in his book Crazy Wisdom. Two years later she attended a meeting of the Haiku Poets of Northern California (HPNC) and quickly became active in that group, the Yuki Teikei Haiku Society, and the Haiku Society of America, and remained so till the end of her life. She was the editor in chief of Mariposa, the journal of the Haiku Poets of Northern California. She edited HSA’s .Crinkled Sunshine: Members’ Anthology 2000 and HPNC’s Flows down the Mountain: Members’ Anthology 1997. Reading and writing haiku contributed to her living more mindfully and more heartfully. Hiking with her husband, gardening, ikebana, attending musical performances and films, and participating in delectations with her family and friends are among the joys that enriched her life and work. She has long fantasized that if she were named in the traditional Native American way, her name would be Walking Heart. Unfortunately Claire passed away at home, surrounded by family, on 17 July 2009 after a long bout with cancer.

Beyond Within: A Collection of Rengay, 1997, Ed. Cherie Hunter Day;

A selection of Claire’s haiku:

blowing out
one birthday candle
the whole family

*
the closer we get . . .
losing my friend’s heart-to-heart
to the waterfall

Advent altar—
a candle wick straightens
within the flame

*
budding maples—
how fast the ground moves
under his tricycle

family reunion—
some of the beached kelp
in knots

*
weathered bench—
I open my palms
to the winter sky

*
slicing apples
into the dented pan—
howl of the wind