"I have been in love at all the times." 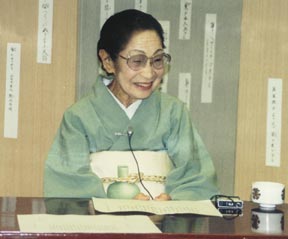 Masajo Suzuki (whose real name was Masa Suzuki) is considered to be one of the most distinguished contemporary love haiku poets. She was born in 1906 as the third daughter of the owner of a seaside inn at Kamogawa, Japan. Besides being a famous haijin, she was also a successful business woman and inn keeper. Her life was filled with a lot of upheaval and loss. Her first husband "disappeared" because he ran huge debts. Her elder sister, who inherited the inn business, suddenly died and Masajo had to take over the family business and marry her sister's older husband. They had a troubled married life from which she "walked out" to start her own new life in Tokyo at 50. She opened and ran a famous watering place in Ginza, Tokyo, called "Unami", of which she took personal charge until she was 90. Her business and career as a haijin went from strength to strength and she made friends with some of the most famous writers and celebrities. Incredibly, Masajo never lost her humility and personality to put other people's interest first.

Masajo Suzuki began studying haiku under the guidance of her late sister's master, Hakusuirô Ôba in 1936. She subsequently joined the Shuntô (Light of Spring Night) haiku group and studied under the guidance of Mantarô Kubota until his death in 1963 and Anju Atsushi. Being a born haiku poet, Masajo not only followed with ease the traditional haiku form and style but she also filled her poems with impact and originality that came from her personal experience. In Masajo’s own words, the source all of her artistic activities has been love. And the reader can feel that because in her both delicate and rich haiku poems nature and human existence become one. She has seen sadness and tragedy, she has had success within her business and her haiku, but in the end Masajo passed away peacefully at the age of 96 at a retirement home in Tokyo on 14 March 2003. The gift of Masajo’s haiku and the message that she sends with each verse transcends time since her emotions and the powerful images she created are as real today as they were when she wrote them.

Masajo’s work was presented in the book “Love Haiku: Masajo Suzuki's Lifetime of Love;” Brooks Books, August, 2000. It contains 150 carefully chosen love haiku selected from the 2,576 haiku from her seven haiku books published between 1955 and 1998. Masajo’s life story is deeply rooted in these haiku and they reveal her as a true master of her craft.

A selection of Masajo’s haiku:

firefly light:
I step off the path
of woman's virtue

love from a distant past –
or the warmth of her sake?
autumn is ending

wishing to fall in love,
I pop a strawberry
into my mouth

pouring each other beer,
these men with whom I shall never
make love

my love affair
lies in the passing
autumn wind