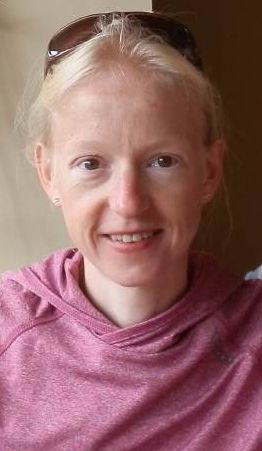 English poet and linguist Rachel Marie Sutcliffe was born in Harrogate, North Yorkshire. Rachel's love of language is reflected in her educational qualifications: a BA in Modern Languages, a Postgraduate Certificate in Education and an MA in English. Her studies and work meant Rachel spent some time abroad, first as an English language assistant in Spain, then as a technical English lecturer in France. After her return to England, she worked as an EFL and Spanish lecturer and a language tutor in her home town of Huddersfield.

During her early twenties Rachel was diagnosed with an incurable, immune disorder and her writing, which had once been a pastime, became a form of therapy. Informed by Rachel's keen observations of both nature and people, her haiku and senryu resonated with readers all over the world.

morning stroll
returning home with me
a ladybug

inner city building
a canvas of honeysuckle
climbs the graffiti

the leaf’s descent
leaving my best years
behind me

streets of childhood
all the faces
strangers now

birds in flight
the child asks
how to grow wings

atlas—
all the life
I once had

spring outside
your hand in mine
in the hospice

mountain hut
the solitude
I seek

deep woods happy to just be

funeral over
my shadow
walks alone