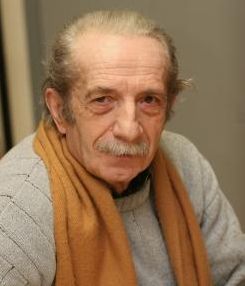 Dimitar Stefanov, a Bulgarian poet, writer, editor and translator, also known as ‘the doyen of Bulgarian haiku’, was born on 20 March 1932 in a small village near Dryanovo, Bulgaria. In 1950 he graduated High School in Dryanovo and then studied Czech and Bulgarian philology at the Charles University in Prague. After graduation he was editor and editor-in-chief of the literary section at Radio Sofia (1955-1969). In the following years he was editor to various newspapers and journals, among them the popular Plamak magazine and the Literary Front newspaper.

Dimitar’s first collection of poems was published in 1957. He was the author of more than twenty books of poems, sonnets, essays; more than ten books for children. He translated mainly from Czech and Slovak languages. He was the first Bulgarian poet to publish his own book of haiku The Forest of Dandelion (Гората на глухарчето) in 1988. Dimitar also edited the first Bulgarian haiku anthology Rain Seeds (Дъждовни семена) in 2001 which included poems by ninety authors. This book played a great role in the popularizing of the haiku genre in Bulgaria.

Dimitar Stefanov was founding member and chairman of the first organization of haiku poets in the country - the Bulgarian Haiku Club. It was founded in 2000, when Jim Kacian and Dimitar Anakiev visited Bulgaria to organize the Haiku Movement in the Balkans. Later this organization was renamed to the Bulgarian Haiku Union (BHU). Dimitar Stefanov died on 19 October 2018 at the age of 86. He left a rich legacy as a poet, essayist and translator. He has translated over 50 books of poetry and prose from Czech, Old Czech, Russina, and Serbian, and with verbatim text - from Old French, Hindi and Japanese. Some of his books have been translated in Slovakia, the Czech Republic, Serbia, England, and Slovenia. He was also presented in haiku anthologies, almanacs and magazines in many European countries, in Argentina, India, the United States and Japan, in more than twenty languages.

Cold moon –
shadows within shadows
along the snowy road.

You and I
were kids
last millennium

The moon is drawing
silky rustle
from the mulberry tree.

cold moon –
shadows within shadows
along the snowy road

village
bit by a blizzard
then bandaged up by it

coming from fog
the bird flies through fog
fading into fog

The summer moon
- But why is life as well? –
in its last quarter.

A butterfly
fixed with a pin –
new Golgotha.