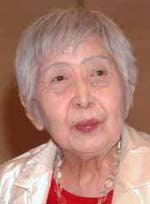 Nobuko Katsura was born Nobuko Niwa in Osaka on 1 November 1914. After graduating from High School, she began writing haiku under the direction of the poet Sojo Hino, editor of the 'Kikan' (The flagship). Later she founded the Marumero (Quince) haiku group with Kenkichi Kusumoto. In March 1945 during the WWII when the American planes bombed Osaka, Nobuko's house caught fire and she was just able to gather her haiku manuscripts before fleeing from the fire. The rescued manuscripts were later published in her first volume, 'Gekkoo shoo’ (Beams of the moon 1949).

In 1954 she helped Katoo Chiyoko edit the magazine 'Josei haiku' (Women's haiku). After 'Gekkoo shoo', she published 'Nyoshin' (The female body) in 1955, 'Banshun' (Late spring) in 1967, 'Shinroku' (Young leaves) in 1974, and several other collections. In 1970 she founded the magazine 'Sooen' (The grass garden), which is still publishing today. She has also been a vice-president of the Modern Haiku Association of Japan. Her ninth collection of haiku 'Kaei' (The shadows of flowers) came out in 1998. Nobuko’s style of writing developed through the years – from the slightly erotic notions in her early poems to the calmer yet full of emotions and sensuality haiku of her later career.

beyond the dark
where I disrobe
an iris in bloom

wild geese –
between their cries, a slice
of silence

the nuisance
of breasts-
a long rainy season

Christmas –
this sadness of being a wife
when did I first feel it?

Far Beyond the Field: Haiku by Japanese Women (Translations from the Asian Classics), by Makoto Ueda (Author), ColumbiaUniversity Press, 2003.