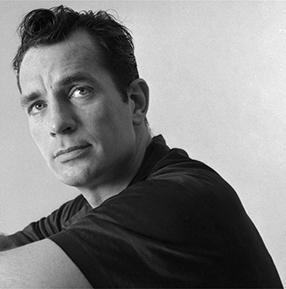 Jack Kerouac, renowned for his groundbreaking Beat Generation novel "On the Road", was also a master of haiku. Following in the tradition of Basho, Buson, Shiki, Issa, and other poets, Kerouac experimented with this centuries-old genre, taking it beyond strict syllable counts into what he believed was the form's essence. He incorporated his 'American' haiku in novels and in his correspondence, notebooks, journals, sketchbooks, and recordings.

Jack Kerouac was born on 12 March 1922 in Lowell, Massachusetts. He won a scholarship to Columbia University in New York where he met William S. Burroughs and Allen Ginsberg. His first novel “The Town and the City” appeared in 1950 but it was “On the Road” published in 1957 that made him one of the most controversial and best known writers of his time. He is considered a literary iconoclast and, alongside William S. Burroughs and Allen Ginsberg, a pioneer of the Beat Generation. Kerouac is recognized for his method of spontaneous prose. Thematically, his work covers topics such as Catholic spirituality, jazz, promiscuity, Buddhism, drugs, poverty, and travel. He became an underground celebrity and, with other beats, a progenitor of the hippie movement, although he remained antagonistic toward some of its politically radical elements. On 21 October 1969 Kerouac died at age 47 from internal bleeding due to long-term alcohol abuse. Since his death Kerouac's literary prestige has grown and several previously unseen works have been published. In 2007, Kerouac was awarded a posthumous honorary degree from the University of Massachusetts Lowell.

Jack Kerouac was an extraordinary poet who worked in several poetry traditions, including sonnets, odes, psalms and blues. In his novel “The Dharma Bums” he describes his discovery of haiku. He was not the first American poet to be attracted to the haiku aesthetics. But it wasn’t until after the WWII that the informed attention to the genre arose with Blyth’s four-volume Haiku in 1949, bringing the classical traditions of Zen and haiku to the West. Kerouac turned to Buddhist study and practice in the early 50’s and in 1955 during his time at Berkeley Jack, along with other poets, immersed in Blyth’s translations and extraordinary commentary on the Japanese works. Finding that Western languages cannot adapt themselves to the “fluid syllabillic Japanese”, Jack sought to redefine the genre and successfully adapted haiku into English.

“Above all, a haiku must be very simple and free of all poetic trickery and make a little picture and yet be as airy and graceful as a Vivaldi pastorella.”
Jack Kerouac

Some of Kerouac’s haiku:

Nodding at the canyon

how little I knew

Even up to yesterday

too dark to read the page

Looking for my cat

I found a butterfly