“Another name for a haiku could be ‘biogram’, since it is the smallest possible description of an essential moment in the poet’s life; and threading a series of them on a string would give the reader a reasonably exact description of the author’s way in life.” 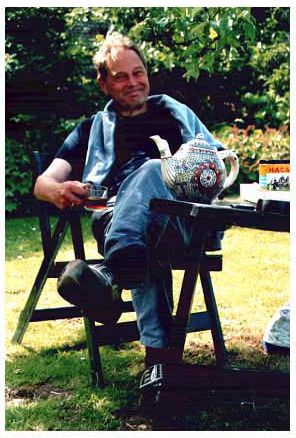 Wim Lofvers was born on 9 August 1930 in Sneek, province of Frisia, the Netherlands. He was a naval doctor in the former Dutch New Guinea (now West Papua), and worked as a general practitioner in Norway and in the Netherlands province of Frisia. His interest in the spiritual things was based mainly on anthroposophy, Buddhism and Zen-Buddhism. His interest in haiku began when in 1956 he received as a birthday present a small German edition of Japanese haiku, Vollmond und Zikadenklänge [Full Moon and the Sound of Ciccadas].  In 1981, Wim created his own private press -  ’t Hoge Woord, which he started with the intention of publishing haiku. Since his retirement in 1993 he has spent most of his time there, doing just that. His interests lie mainly with micro-editions, among others, the 'Radish' series, in which haiku poets can present 25 - 28 of their haiku in a pocket-sized book. Another production was the annual 'Spreeuwenagenda' (Starling Haiku Diary) with several editions so far. While serving as the president for the Haiku Kring Nederland (Haiku Circle Netherlands) from 1996 to 2000 he got acquainted with many poets and discovered how interesting it was to study and publish other people’s work. This led to the foundation of an independent international haiku journal by himself and Milivoj Objedovic, a Croatian refugee living in Holland. This biannual international haiku journal, called 'Woodpecker - Journal for sharing haiku' (1995-2002) published haiku by poets from all over the world, in native languages as well as in English. It soon became the most truly international haiku forum in the world at the time, supporting and spreading the development of world haiku, its philosophy and aesthetics.

“Radijs” – by 't Hoge Woord is a new series of micro-books of haiku designed, and produced by Wim Lofvers, Bakhuizen, The Netherlands;

Nobody around
I start a conversation
with the carthorse

this road leads
to patches of sunlight
chased by clouds

before the fresco
just painted afresh
the first prayer

the choir left
but the singing remains
in the May evening

November mist
written in the field
a mole's message

change
still warm
from a hand

the mopped floor
still holds the print of
your bare feet