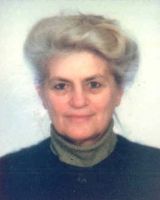 Rajna Begović was born in Skopje, Macedonia on 4 October 1939. She worked as a physician. Rajna was a member of the Haiku Society of Serbia and Montenegro and her work has been included in a number of haiku collections, journals, and anthologies. She was the recipient of many national and international awards for haiku, waka, and haibun. Rajna proved to be a very talented and sensitive poet, choosing very carefully the words to express her feelings, her opinion and the ever present connection with nature in our daily life. She also wrote aphorisms, short stories, and classical poems. She lived in Belgrade, Serbia. Sadly Rajna died on 15 August 2011.

Small steps
hurrying long ones on.
First day of school.

Birds flying
A boy spreading his arms
and swinging them

Dewdrops gleaming
on the chestnut buds
Not on each one

July heat
in the lift
a butterfly

Dried meadow
Bent shadows of an old woman
and her goat

A bird trills
now and then
Infusion drips

This profile was created in collaboration with Rajna’s daughter, Tatjana Stefanović and the Serbian poet Sasa Vazic. We are very grateful for their help and support!