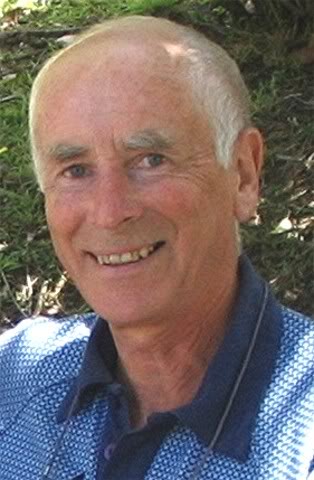 “I venture to claim that haiku is currently alive and thriving in the Shaky Isles [New Zealand]. To my eyes the future looks rosy - and I’m confident it will be rosy - just as long as the passion for the form and the voluntary efforts evident today are maintained or surpassed in the future.”

(“Haiku 45 South” by Cyril Childs, delivered at the fourth Haiku Pacific Rim Conference (Terrigal, Australia) in September 2009 and published in Wind over Water, the Conference Proceedings)

Cyril Childs was a cricketer, scientist, leading haiku poet and editor of national haiku anthologies in New Zealand. He was born in Invercargill in 1941. He became intrigued with haiku while living in Matsuyama, Japan for several months during 1989-90. He was a past-president of the NZ Poetry Society, edited both of the NZ Haiku Anthologies published by the NZPS (1993,1998) and co-edited Listening to the Rain (Small White Teapot Group, Christchurch, 2002) – an anthology of haiku and haibun by Christchurch writers.

His own book, Beyond the Paper Lanterns: A Journey with Cancer, dedicated to his first wife, was published in 2000. That same year a copy was carried to the summit of Mt Fuji in Japan by American haiku poet Jerry Kilbride in a climb organised by the US Breast Cancer Fund. In a piece published in 2006 Cyril wrote: "Jerry read from the book to the climbers the night before their ascent and he carried it to the summit. After the climb Jerry had everyone write a message in the book and returned it to me. It will remain a precious thing to me and my family."

Cyril judged three NZPS haiku competitions and was co-judge, with Jerry Kilbride, of the HSA's Henderson Award in 2000. Cyril also wrote in other poetic forms like free verse. His poetry appeared widely in international magazines and anthologies such as contemporary haibun online, Modern Haiku, Frogpond and Wind over Water: an anthology of haiku and tanka and in New Zealand journals, including Poetry NZ, JAAM, Kokako, CommonTatta and Bravado. His book reviews appeared in JAAM, New Zealand Books and on the NZ Poetry Society website. Childs also had a keen interest in sports such as rugby and cricket and in 2010 appeared in the cricket poetry anthology A Tingling Catch: A Century of New Zealand Cricket Poems 1864-2009.

After a career as a scientist, Cyril retired to Port Chalmers in a home overlooking Otago Harbour and also enjoyed spending time at his beloved bach (crib) in Riverton. A biography of his uncle's wartime exploits absorbed most of his writing energy in later years. The book was under contract for publication at the time of his death.  Childs died on 27 January 2012, only a few months after himself being diagnosed with cancer. He is survived by his son Norris, his daughter Lia and his second wife Christine.

no name
for its colour
tea-table rose

full white moon
touching . . . not touching
the top of the hill

daylight saving ends —
an early recall
to the cancer clinic

amidst mountains
she pauses to admire
violets

tea break
a sparrow at point fossicks
among the seed-heads

me
pulling
the weed
pulling
me

better than ever
in my neighbour's garden
my old roses

winter morning
the lame goose lagging a little
behind its gaggle

wind over water
so easily the cormorant
one to the other

for tonight enough
the stars ...
the black sky

backyard cricket
Dad and I pick up
the kitchen window

bouncing ball
beating the giggling boy
down the zig-zag

close of play –
shadows of trees
seep over the pitch