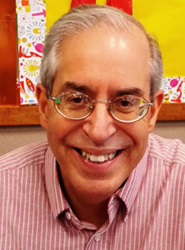 Carlos Colón began writing poetry and song parodies in grade school. Upon graduation from college, he began submitting to magazines and newspapers and was first published in South by Southeast, 2:2 (1995). He has since published over 1400 poems, 8 articles, 126 reviews, and 10 songs in a variety of journals and anthologies including Modern Haiku, Frogpond, Journal of Poetry Therapy, The Heron's Nest , Writer's Digest, Louisiana Literature, Haiku in English, Higginson's Haiku World, The Southern Poetry Anthology, The Red Moon Anthology, etc. Eight of his poems have been published in The Red Moon Anthology, which yearly collects the best English-Language haiku and related works. Carlos Colón is the author of 12 chapbooks including collections of haiku and concrete poetry as well as his book “Haiku Elvis: A Life in 17 Syllables (or Less)”. His poetry is also part of two public art projects: the "Let the Good Times Roll" mural in Festival Plaza - Shreveport, Louisiana, and a renku display outside of a temple on Sado Island in Japan. In addition, Carlos was editor of Shreve Memorial Library's Electronic Poetry Network, which he established in 1997, a 1994 Pushcart Prize nominee and was also named Caddo Parish Poet Laureate in 2014.

As a dedicated practicing haiku and renku poet and a long-time member of the Haiku Society of America, Carlos Colón was a mentor to numerous poets and writers across the world. Locally, he served as a board member of the Shreveport Regional Arts Council (SRAC) where he fostered a deep appreciation for the arts in Shreveport. An exceptional collaborator, Carlos worked with fellow poets Alexis Rotella, Marlene Mountain, Raffael de Gruttola, and others writing concrete poetry and various renga forms. Many of his remarkable poems originally appeared in these innovative collaborative works.

In addition to writing haiku, Carlos was an accomplished bridge player and a man of strong faith. As a life-long member of St. Joseph Catholic Church, he was an active prayer warrior, assisted with the Rite of Christian Initiation of Adults (RCIA) program, and was a sacristan and Eucharistic Minister for daily mass.

Carlos Colón, age 63, passed away on Sunday, 30 October 2016 from a heart attack. He is survived by his wife of 38 years, Alma; daughter, Gina and his grandson, Anthony; sisters, Gloria , Linda, Sylvia; brother, Richard.

(a part of "One Eight Hundred" (linked haiku by Marlene Mountain and Carlos Colón) in "Mirrors", Winter 1995)

zen concert
an air guitar
slightly out of tune

in the wrong
place again
my accent

(From a Kind Neighbor: Haiku Society of America Members' Anthology 1997)

my daughter’s eyes
when I refuse
the beggar

ready to carve
a smile on it
this orange moon

in the middle
of making love
counting syllables

smoothing it
with gloved hands
the ransom note

Additional information for this profile has been kindly provided by Charles Trumbull including Carlos’ obituary published in Shreveport Times from Nov. 3 to Nov. 4, 2016.