a word or small gathering of words which
attempts to express an individual's
evolving consciousness of self, of others,
and of the universe. 5/20/88

a relatively short poem/non-poem expressible
if shared with others in a variety of visual
configurations if written and in a variety of tones if
spoken or sung which flows or is contrived in
response to what one sees, hears, touches, smells,
etc, and in particular to what one thinks and feels at a
given time within any aspect of one's personal
development. 8/26/98

old haiku along with several other japanese disciplines seek to reduce
content to code words, stylized gestures and the like stemming from an
unique cultural identification with cleanliness, orderliness, asymmetry
and brevity.

western 'japaneasy' haiku is often the result of an inclusion of only
certain surface 'rules' from the highly-regulated and complex old
japanese haiku and is often written in the style of translations.
new haiku in various countries allows a more personal
interpretation of one's surroundings within the global
village as well as an awareness that nature which of
course includes the human animal is in deep trouble.
3/2001

will someone in japan throw up on the younger

finally fuzz of the fiddleheads

the corpses left for dead

all i remember of the haiku moment: dickheads

in the case of freedom united we don't stand

in the mailbox while snowed in a barebreasted wom with snakes 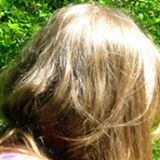 Marlene Mountain is a talented, highly regarded haiku poet and painter. She graduated from the University of Oklahoma with a B.F.A. and an M.A. from the University of North Dakota. Her first haiku were written in 1968 and quickly became an influential voice for the one-line haiku style. A distinguished book of hers, the old tin roof, revealed her innovative concepts and instantly placed her amongst the haiku greats!