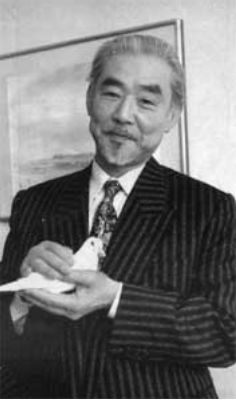 “Art does not come from art. Art comes from life.” Kaji Aso

Kaji Aso was born in Tokyo, Japan in 1936. He received BFA in Painting and MFA in Printmaking at Tokyo University of Art. But he was not only an artist; he was also a teacher, singer, adventurer, poet, and philosopher. All those who speak of Kaji Aso use the words “Renaissance man” to capture his many accomplishments and his boundless spirit.

As a talented tenor, Kaji Aso performed opera and Italian and Japanese songs. He ran in thirty-six Boston Marathons and led kayak expeditions down some of the longest rivers in the world including the Mississippi, the Nile, and the Volga.

Although haiku was just one of his many special gifts, Kaji Aso very often expressed the wisdom of his beliefs in haiku and did a lot of haiku illustrations. He organised and took active part in many seminars and lectures about Japanese art, haiku, sumi painting and calligraphy.

spring snow
a little remains
on the stolen car

voice of the peeper
glides
on the spring breeze

harvest moon
spider too,
gazing at it quietly 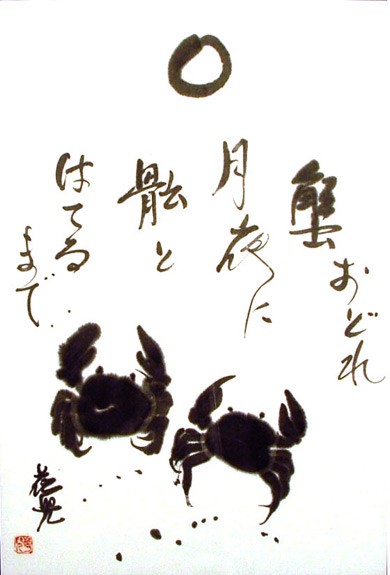 Dance Crabs
Under the full moon
Until you become skeleton

Kaji Aso was a true “Renaissance man” man and he will be remembered by the many people whose lives he deeply touched with his generosity, unfailing sense of humanity, and inspiring art.

Some of Kajo Aso’s many distinguished awards:

1980 - Proclaimed by the City of Boston, Distinguished Bostonian in honour of Boston’s 350th Jubilee Birthday

1996 - Certificate of Recognition as one of most important international calligraphers of the world, Beijing Art Academy, China

1997 - Medal of Honour from Mayor of Lisbon, Portugal in honour of successfully leading expedition of artists down Tagus River

1998 - One of “2000 Outstanding People of the 20th Century”, International Biographical Centre, Cambridge, England