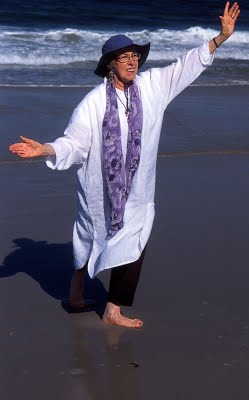 Kay’s attention shifted to haiku in 1990. Her work, which included haiku, haiga, and tanka, was published in all the major English-language haiku journals. She was featured twice in the HPNC Two Autumns Reading Series (in 1993 and 2002), and served as an editor for the 1997 Two Autumns anthology, Beneath Cherry Blossoms. She was a long-time member of the Haiku Poets of Northern California and served as its President in 1996. Kay served as a judge for the 1994 Gerald M. Brady Memorial Senryu Awards (by the Haiku Society of America) and for the 2001 International Haiku Contest (by the Palomar Branch of the National League of American Pen Women).

Kay’s use of haiku in working with other cancer patients was featured, along with her haiku, in Emiko Miyashita's The New Pond. Although weakened by metastatic malignant melanoma and the effects of treatment, Kay continued to write, paint, and participate in haiku activities. After a seven-year battle, she leaves her husband, two daughters, four grandchildren, one great grandchild, and countless haiku friends.

Many of Kay’s poems were honoured in national contests and published in major anthologies, including William J. Higginson's Haiku World. Some of her awards include:

Her tanka awards include three Tanka Splendor Awards (1993), First Place, HPNC San Francisco International Tanka Contest (1995), and Editor’s Choice Award, Brussels Sprout (1995). A tanka was included in the anthology Wind Five Folded (1995) and in the Acorn Tanka Supplement (2001). Three of her tanka were selected for The Tanka Anthology. Her work also appeared in the premier edition of Reeds, published by Jeanne Emrich.

The First Book of Philosophy(for gifted 6th grade students) and I and thou in the here and now (named Word Books, Inc. Book of the Month). She edited the 1997 Two Autumns anthology, Beneath Cherry Blossoms, and was working on a book to help a new generation find and travel the Haiku Path to Joy.

A selection of Kay Anderson’s poems:

what else
do I need to know . . .
pine trees growing from stone

five years in
the wrong window:
a violet’s first bloom

stuck on the sky —

meditating—
a buzzing fly
in a web

Sunday morning teacher
your spirit was gentle
upon the path
............I was three or four
and I still walk it with you

I lift
the white peach to my lips
its skin readily yields
an offering from you
a deep honour, somehow, for me

how delicate
these Icelandic poppies
like those my gruff father grew
.........flowers cannot hug
didn’t he know that?

I breathe
deeply of this autumn air
memories lapping my mind
soon to be seventy . . .
I understand my parents

Grown daughter and I
sit upon wooden steps,
“springing the seedpods”
of a dry larkspur.
The baby in her womb.