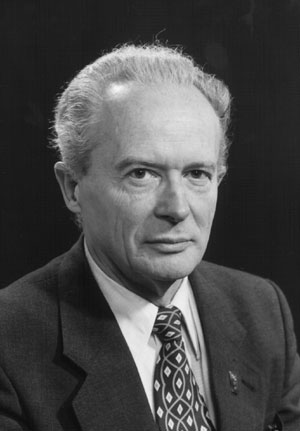 The history of haiku poetry in Croatia are inextricably tied to the name of the outstanding Croatian Japanologist, mathematician, academic and writer Vladimir Devidé -  a member of the Croatian Academy of Sciences and Arts in Zagreb.

Vladimir Devidé was born in Zagreb in 1925. He graduated from the Technical University of Zagreb in 1951, and did a PhD in the field of Mathematical sciences at the Faculty of Science. Since 1965 he has been a professor of the Faculty of Mechanical Engineering, University of Zagreb. He did post-doctoral studies in Israel (1960) and in Japan (1961 - 1963) and was a visiting professor at Monash University, Australia (1968) and Ohio State University in Columbus, USA (1971). He participated in numerous international mathematical congresses and symposia.

·         Special recognition of the Japanese Ministry of Culture for outstanding contribution to international understanding between Japan and Eastern Europe (2004).

Selection of Vladimir’s haiku and haibun:

A small pool of blood -
Killed in air raid:
little girl and her huge doll - (from A Thousand Hummingbirds, published in Belgium in 1993)

A bird’s song
scattered among
raindrops.

In bright moonlight
a falling leaf and its shadow
meet on the soil.

Black-and-white
drawing: a forest
in snow.

A spring shower:
and then, each drop turns into
a wild strawberry. - (from In Trenutak/ The Moment, Ceres, Zagreb 1997)

Once, while walking by the road, past cut hay, I saw in the distance a girl with lank flaxen hair; with loose lank hair like water overflowing a round white stone in the mountain brook whenever there is heavy rain or in spring when snow is melting on the surrounding hills. I do not know whether she was beautiful; I just saw her big blue eyes for a moment. I never saw her again, but in my thoughts I looked for a long, long time, day and night, at the girl with lank flaxen hair.

Over a round stone
water of a mountain brook –
a girl's hair.

I would like to pick some blue flowers from the meadow to weave them into the flaxen hair, flowers of forget me-not and blue bell-flowers. Where is she now, that girl with flaxen hair? In the Milky Way there is still only a reflection of her hair. But there are some blades of it in the golden straw of ripe corn. Just one lock is still overflowing that round stone in the mountain brook, whenever it is pierced by a ray of the setting Sun bursting through the pine-trees.

Japanese Princess Michiko, wife of Crown Prince Akihito (in 1989 they became Empress and Emperor of Japan), receiving a gift from professor Vladimir Devidé near Dubrovnik, on 12th June 1976. The gift was his book Japanska haiku poezija i njen kulturno-povijesni okvir (Japanese Haiku Poetry and its Cultural and Historical Framework), issued in Zagreb in 1976, published in Croatian. 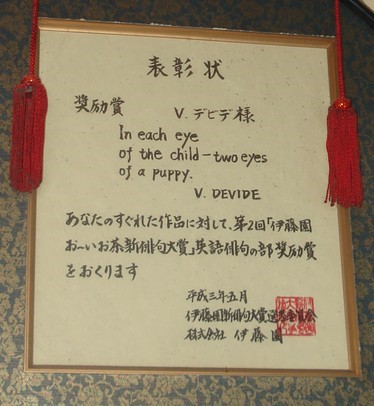 Vladimir Devidé received 18 prizes on various Japanese international haiku competitions. Above is one of his earliest Japanese prizes:

In each eye
of the child - two eyes
of a puppy.