"Raymond Roseliep is the John Donne of Western haiku. . . . the wit, the conceptual nature of his haiku, and the tension between the sacred and the profane . . ." --Chuck Brickley (from Firefly in My Eyecup by Raymond Roseliep, High/Coo Press Mini-chapbooks, 1979) 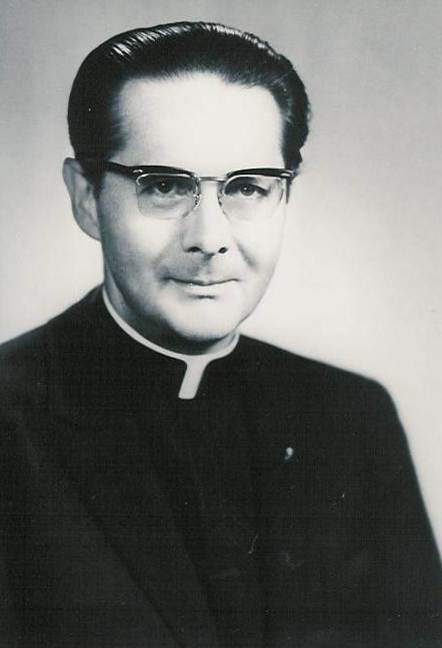 Raymond Roseliep was a poet and contemporary master of the English haiku and a Catholic priest. He was born on 11 August 1917, in Farley, Iowa. In 1939 he graduated from Loras College with a Bachelor of Arts, in 1948 he received a Master of Arts in English from Catholic University of America, and in 1954 he received a Doctor of Philosophy in English Literature from Notre Dame University. He was ordained on 12 June 1943 at St. Raphael’s Cathedral, Dubuque, Iowa. During the mid-50’s Raymond Roseliep began writing poetry that is less that of a “Catholic priest” and more secular in nature. Widely published and recognized as a master of traditional English verse forms, in 1960 Roseliep began writing haiku, at first in the traditional 5-7-5 form, then in more experimental ways. His first book The Linen Bands was published by The Newman Press in 1961. Roseliep published over twenty books, including Rabbit in the Moon, Step on the Rain, The Still Point, Light Footsteps, and Firefly in the Eyecup. In 1964 he was the Poet-in-residence at Georgetown University. In addition to the major haiku journals which published his work regularly, more than ninety other magazines have printed his haiku, and he appears in many anthologies and in a growing number of textbooks. His haiku attracted critical praise from such poets as W.H. Auden, Josephine Jacobsen, Denise Levertov, William Stafford, X.J. Kennedy, and A.R. Ammons. In 1982 he was appointed Professor Emeritus at Loras College. Father Raymond Roseliep died on 6 December 1983 of an aneurysm.

For Raymond Roseliep the two most sacred themes were creation and love, so it was only natural that he would explore both in his haiku. In an interview first published in 1979, Roseliep was asked how a priest could be writing such evocative, sometimes erotic, love poetry. “To talk about that,” Roseliep said, “I should return for a moment to that Catholic-poetry period of mine, and I can briefly tell you how it was inevitable that I needed a fresh theme. In those early days I was writing about the Mass, the sacraments, parish experiences, religious encounters of all dimensions — in people, nature, anywhere.” He added: “I needed a new outlook. I knew that religious poetry and love poetry are the hardest of all to write, and since I hadn’t attained full success in one, I would try the other. And I have been exploring the love theme ever since. It’s wonderful. It keeps me alive and young and remembering; and always with feelings that are deepest and most sacred in all of us.”(Delta Epsilon Sigma Bulletin24:4 (December 1979);A Roseliep Retrospective: Poems & Other Words By & About Raymond Roseliep (Ithaca, N.Y.: Alembic Press, 1980), 13.)

1934 - As a senior in high school, entered a dozen poems anonymously in poetry contest and won the three top prizes and all honourable mentions. He was asked to withdraw all entries but the one that won first prize.

from the heart out

who will I give it

in the soft burst

in weeds where we love

to get hibiscus red

the artist eats the flower

More from his haiku at: