H. Gene Murtha, a poet and naturalist, was born on 19 October 1955 in Philadelphia, Pennsylvania. Gene had a difficult childhood when he and four of his siblings were placed in foster homes between 1960 and 1962. Thankfully later they were reunited with their birth mother. In the early 70's he was a model, and male dancer, but later he became a Naturalist and Environmentalist, and his primary interest was the preservation of the New Jersey wetlands, and specifically the prothonotary warbler, that migrates to the USA.

Gene has been writing on and off for more than four decades, and first discovered haiku, and/or haiku like poems in the works of Carl Sandburg, and Wm. Carlos Williams, and in many of the beat poets, including:  Kerouac, Snyder, and Ginsberg. He started to write haiku himself in the late 1999, and began seriously applying to the form in 2002. He was also a performance and free verse poet.

Gene served as tanka editor of a short form poetry online publication Notes from the Gean and was a member of The Haiku Society of America, The Tanka Society of America, Haiku Oz, the Pennsylvania Poetry Society, Mad Poets Society, and The Nick Virgilio Haiku Association. Gene sponsored and judged the first haiku contest for the inner city children of Camden, New Jersey for the Virgilio Group, of which he is a lifetime member. With renku partners William J. Higginson and Paul MacNeil, he was co-inventor of the single-words shisan renku entitled, Cobweb.

H. Gene Murtha's work was included in Haiku in English: The First Hundred Years [edited by Jim Kacian, Philip Rowland, and Allan Burns] (W.W. Norton and Company, 2013). He was one of seventeen poets featured in A New Resonance 6: Emerging Voices in English-Language Haiku (Red Moon Press, 2009). His work has now been published in Japan, Australia, and the United States.

Some of his awards include:

spring mist –
a mallard paddles
through our stillborn's ashes

(The Heron's Nest vol.6, 2006 and was included within the Special Mentions section for the year.)

dawn
caught in a dew drop --
the empty swing

summer haze--
a crow flaps free
of the asphalt

sudden chill . . .
he slips into
his daughter's bed 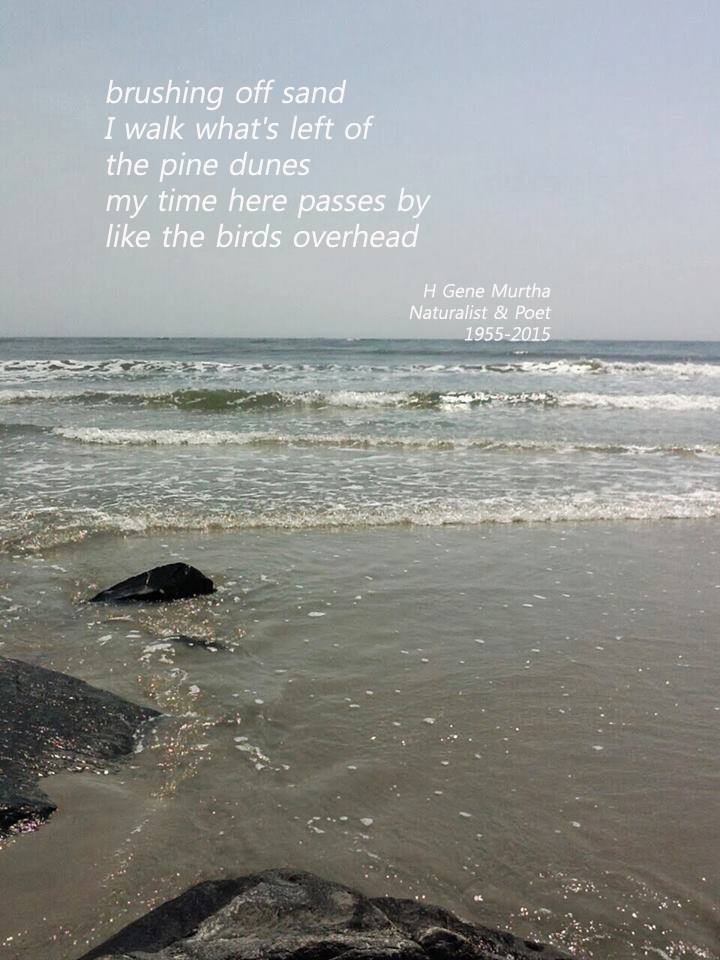