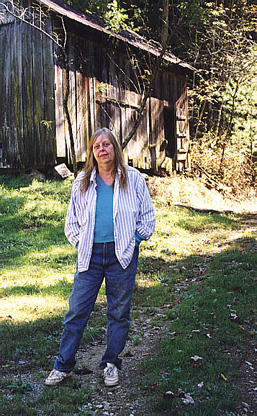 Marlene Mountain (born Marlene Morelock) was an American artist, writer, and haiku poet as well as social and political activist. She was born on 11 December 1939 in Ada, Oklahoma, and earned a Bachelor of Fine Arts from the University of Oklahoma and Master of Arts from the University of North Dakota in painting with a minor in literature. Her works have been included in many exhibitions and they strongly reflect her view on women's issues, environmental matters, and politics. She was a fiction and non-fiction writer and has printed cards, produced books and written plays with haiku incorporated. Marlene also taught courses in drawing and design. She painted and wrote in the mountains of Tennessee, from which later in 1982 she took her pseudonym.

In 1966 Marlene married John Wills, one of the first modern practitioners of English-language haiku, and she contributed minimalist artwork to his innovative 1970 collection ‘river’. She began writing haiku in 1968 and was one of the first haiku poets to focus on the one-line approach by way of analogy with the one-column vertical writing of Japanese haiku thus becoming a major contributor to the English-language haiku in her own right. Marlene also published numerous "concrete" poems for which she coined the term "unaloud haiku".

In recognition of her continuing devotion to the development of haiku and related arts in 2014-2015 Marlene Mountain was appointed as the Honorary Curator of the American Haiku Archives which include the HSA archives and is one of the largest public collection of haiku materials outside Japan.

Marlene also maintained a website that featured selections of her essays, reviews, paintings, calligraphy, poetry (incl. one-line poems, visual poems, unaloud haiku, dadaku, tearouts), and other creative art forms. She had a unique influential voice in the haiku circles and changed some preconceptions by developing her own style. For instance in her ground-breaking essay, "One-Image Haiku" (first published in the Australian haiku journal Tweed and reprinted in A Haiku Path), Marlene challenged the idea that haiku must consist of two juxtaposed images. In his review of her first book, the old tin roof, (1976) considered to be one of the most seminal books of haiku ever published, Cor van den Heuvel wrote that some of the best poems in that collection "immediately placed [her] in the front rank of American haiku poets."

Until her death on 15 March 2018 Marlene Mountain stayed true to herself and continued to write with outspoken conviction, developing, experimenting and mastering the possibilities inherent to the haiku genre.

the taste of summer water

pig and i spring rain

he leans on the gate going staying

thrush song a few days before the thrush

end of the cold spell

of my under socks

together as we dry there is the listening to rain

one fly everywhere the heat

spin on dead and wounded any scratch of pines

With gratitude to Charles Trumbull who has kindly provided most information for this profile. Many thanks indeed!