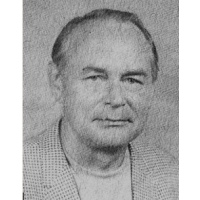 John Howard Wills was born on 4 July 1921 in Los Angeles, California. He received an MA degree from the University of Chicago in 1951, and a PhD from Washington University in St. Louis in 1961. For more than two decades John taught American and English literature at universities in Ohio, Wisconsin, Minnesota, North Dakota, North Carolina, Georgia, and Tennessee and during that time, he published critical essays on T. S. Eliot, Joseph Conrad, and other writers. After the death of his first wife, he married artist and poet Marlene Morelock (now known as Marlene Mountain). They worked together on several haiku projects with him writing the poem and her creating the artwork behind the poem – drawings and photographs.

John’s earliest attempts at writing haiku were made in 1965 after Marlene showed him 'The Way of Zen' by Alan Watts. Actually his earliest haiku writing was influenced by his children's poems.  Later in 1968, a colleague gave John and Marlene some back copies of ‘American Haiku’ (which had published its last issue that May). John’s serious interest in haiku began after getting acquainted with the work of Nicholas Virgilio. As he wrote more and more haiku, his skills quickly improved and some early work appeared in 1969 in Haiku West, SCTH, Haiku (Canada), and Haiku Spotlight (Japan). Within that same year, John published his first two books - Weathervanes and Back Country. If one considers the poets publishing in early ‘American haiku’ as the first wave, John was among the second wave of  contemporary writers of English-language haiku and some of his earliest work did not follow the traditional rules. He had a very unique style of writing and according to some haiku experts there was a certain iambic meter to his style, almost like a musical flow in his haiku. Encouraged by his wife Marlene Mountain who was one of the first English-language haiku poets to write haiku regularly in a single horizontal line, John wrote some 'one-line' haiku which were later published.

In 1970, John spent the summer studying haiku in Matsuyama, Japan, under a research grant from Georgia Southern College, and in 1971, he moved with his family to Tennessee. They lived on 100 acres in the mountains of Tennessee and named their land "Sweetwater." Much of his best work was written there and he would be called by some the greatest nature poet writing haiku.

By the end of his life, John Wills had published more than 800 haiku and nine books. His haiku were published in journals and anthologies and his work still appears in articles and essays written by a new generation of haiku poets, as well as by his contemporaries who continue to cherish and admire his work. John Wills died on 24 September 1993.

Awards and other Honours:

autumn wind
the rise and fall
of sparrows

the river
leans upon the snag
a moment

dusk from rock to rock a waterthrush


in an upstairs room
of the abandoned house
a doll moongazing

More of John’s early haiku at:

Some articles, essays and interviews with John Wills:

This profile was created in collaboration with John Wills’ wife the poet and artist Marlene Mountain. We appreciate her help in updating the available information on John’s biography and publications!